Among other key findings, analysts said turnover remains a problem for dealers. Nearly 80% of dealers in the study said turnover is an issue affecting their business, with 23% saying it’s a major issue. Respondents cited inadequate or lack of training and ineffective hiring processes as the biggest factors leading to turnover. Seven in 10 dealers said their salespeople have told them they don’t have enough training or information.

Nine out of 10 dealers said hiring good salespeople is difficult. Seventy-six percent of dealers said they’ve hired people without automotive experience, and 62% said they’ve hired people without sales experience of any kind. Ninety percent of dealers surveyed rely on high-commission compensation, with 42% offering no fixed salary at all.

Finally, analysts said, dealers are looking to change their sales process. Four in 10 dealers said they’re considering changes to their sales process in the next 12 months. Moving to a more consultative sales process was the top change considered, followed by adding technology. Seventy percent of dealers in the study believe technology makes salespeople more successful and builds trust and confidence with customers.

CarMax steps up their game. Are you ready to compete?

3 ways to give shoppers the modern experience they expect

Authenticity as a competitive advantage

Selling Cars in the Age of Disruption 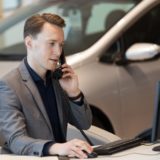 6 tips for a bulletproof phone pitch